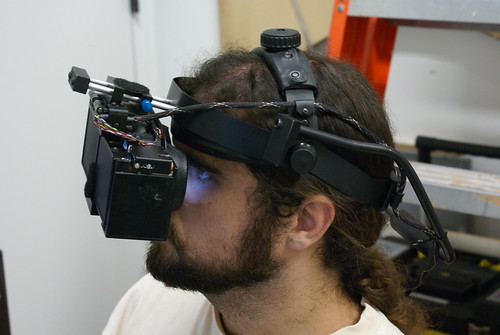 A decade ago , the dream of virtual space  was about to be realized, or so it seemed. Videoconferencing promised to eliminate the need for travel; the “glove” and VR  glasses were ubiquitous features at malls as were  elaborate 3D simulation pods. I remember architecture students at the time speculating about the end of architecture–who needs  spaces for conferences,meetings, social interaction when all that can be done virtually. Oddly enough as the web has grown , virtual reality has become less about hardware and  more about software ie  social media 2.0. Seems virtual reality is getting more virtual. One major exception is the military use of  virtual reality to wage combat at a distance.

On its face, it seems like the less stressful assignment. Instead of being deployed to Afghanistan or Iraq, some pilots and other crew members of the U.S. military’s unmanned Predator drones live at home in suburban Las Vegas and commute to a nearby Air Force base to serve for part of the day. They don’t perform takeoffs and landings, which are handled overseas. But the Predator crews at Nellis Air Force Base in Nevada “are at least as fatigued as crews deployed to Iraq,” if not more so, according to a series of reports by Air Force Lt. Col. Anthony P. Tvaryanas. The [reports] also showed that Predator crews were suffering through “impaired domestic relationships.”

Why is this? Part of the problem lies in what Tvaryanas calls the “sensory isolation” of pilots in Nevada flying drones 7,500 miles away. Although there are cameras mounted on the planes, remote pilots do not receive the kind of cues from their sense of touch and place that pilots who are actually in their planes get automatically. That makes flying drones physically confusing and mentally exhausting. Perhaps this helps explain the results of another study Tvaryanas published with a colleague in May, which examined 95 Predator “mishaps and safety incidents” reported to the Air Force over an eight-year period. Fifty-seven percent of crew-member-related mishaps were, they write, “consistent with situation awareness errors associated with perception of the environment” — meaning that it’s hard to grasp your environment when you’re not actually in it.

Although these studies were limited, it does conform to our sense that seeing is not being. By working with concepts, plans, sections  and other instruments, Architects are constantly looking at the third dimension as an equivalent of the other two. We move around, through designs, we make models, hold materials in our hands, look at architecture spatially. This effort to “be” in the world to inhabit “the flesh of the world” as Merleau-Ponty famously wrote about the third dimension,  joins the haptic with  the visual, or so we hope.

Over the past decade the explosion of design publications, print and digital, and the advances in 3D rendering have placed a premium on the image. One hallmark of our times is architecture as a spectacle; if it looks spectacular it will get press, regarless of it’s virtues or weaknesses. This creeping emphasis on the visual brings us back to the virtual. If pilots are losing their minds because of the loss of the environment and architecture is reduced to image–at least in publications, shouldn’t we give pause to how we consume and produce architecture.

It’s interesting that computer models, as wonderful a tool as they are, do not replace physical models. Could the touch, texture, light qualities and spatial nuance of physical models be what allows us to “grasp the environment’ in a way those pilots can’t? And as abstract as a plan or section is could it be that at a fundamental level these kinds of drawings allow  metrics and order of the environment to be cognated, something the drone pilots were missing.